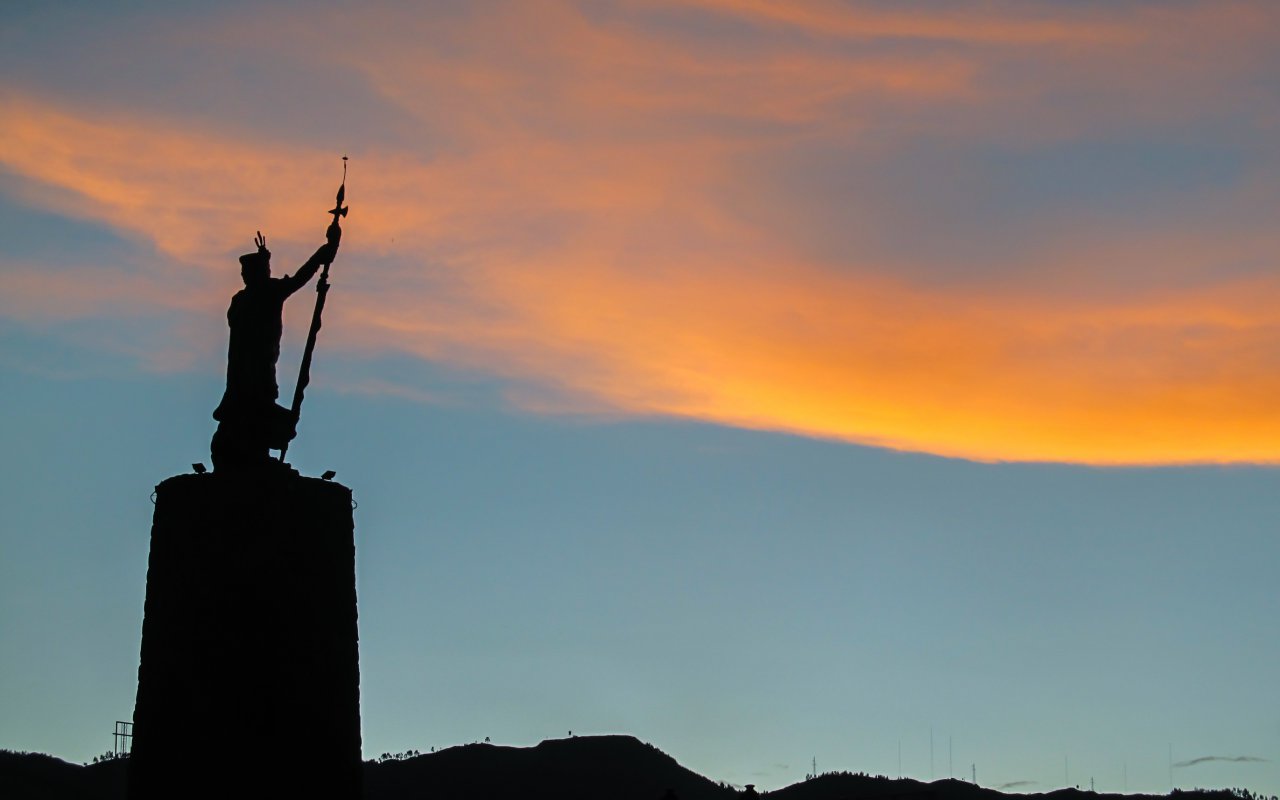 The last emperor of the Inca world

Claiming the memory of Túpac Amaru I, José Gabriel Condorcanqui Noguerason took up the fight of the last Inca emperor and initiated the revolt of the natives against Hispanic oppression.

This prestigious surname, endorsed twice two centuries apart, has acquired a mythical dimension to the point of being known beyond the Andes Cordillera alone: ​​Túpac Amaru, the “Royal Serpent” in Quechua, is the major symbol of resistance to oppression – Hispanic, then whatever its origin – of the Peruvian and South American outcasts in general, of the Amerindian masses of the whole region in particular. His celebrity is matched only by his power of seduction.

Born in 1738 in Surimana, between the valleys of  Cuzco and the upper Peruvian altiplano (current Bolivia), José Gabriel Condorcanqui Noguera comes from a wealthy family of the viceroyalty of colonial Peru. At a very young age, this mestizo lost his father, a respected curacao (local Indian chief) whose authority extended over the villages of Surimana, Tungasuca, and Pampamarca, located at the confluence of important trade routes. Sent to the college of Saint-François-Borgia in Cuzco, run by the Jesuits who were then active in Latin America, he received the best possible education: that given to the sons of native dignitaries. Then, he studied at San Marcos University in Lima, the oldest on the continent.

Prepared for the high functions that his rank allowed him, José Gabriel educated himself by reading in particular the Royal Commentaries of the Inca Garcilaso de la Vega (1539-1616). This work of history, remarkable work of a noble mestizo of humanist sensitivity, recounts the pre-Hispanic past of Peru by analyzing as much as by idealizing the social organization of the Inca Empire. It participates fully in the general movement that affects the Andes during the Age of Enlightenment: “the Inca renaissance” allows the descendants of the empire conquered in 1532 by the conquistador Francisco Pizarro to raise their heads and, by imitation, many of the abandoned colonial society identify with this glorious past. José Gabriel is sensitive to this current of ideas, especially when he observes the harsh reality that surrounds him.

Indeed, the Peruvian colonial society is stratified in pyramidal social strata covering racial distinctions: the Spaniards of metropolitan France occupy the highest positions; the Creoles (Hispanics born in Peru), divided between large fortunes and modest people, are in competition with the royal officials who look down on them; the mestizos, whose numbers are increasing, are clearing their way between success and prejudice; the Indian mass, mostly peasant, submissive and despised, collects the crumbs of this edifice, while a minority of African slaves is kept away (a few mulattoes mingle with the mestizos).

Subject to tributes in kind accompanied by days of work (the encomienda system set up in the wake of the Conquista), the natives are de facto and de jure serfs heavily enslaved to large livestock estates (estancias) or agricultural (haciendas). Added to the grueling chores carried out in the mines (the mita), which they had to perform on pain of severe punishment, and demanding daily work in the weaving workshops (obrajes). Marked by continuous exploitation, the daily life of the Indian masses is shaken by sporadic rebellions that erupt as quickly as they are brutally suppressed. Once assumed the paternal function, José Gabriel Condorcanqui, therefore, takes up the pen to denounce this fundamentally unequal order.

In 1777, he addressed a long memoir to the viceroy of Lima. He claims exemption from the mita for the Indians of his territory, respect for the Leyes de India (a legal corpus supposed to guarantee the rights of the natives), and castigates el mal Gobierno of the royal representatives of the Crown of Aragon and Castile. He will never receive an answer. This was unwelcome to the colonial authorities at a time when a series of particularly unpopular taxes were being imposed. To make matters worse, the abject behavior of the local royal representative, the corregidor Antonio de Arriaga, infuriated his Indian subjects.

October 4, 1780. Following too much vexation, a riot broke out. Very quickly, José Gabriel took over the management. Captured, Arriaga was put to death “in the name of the king”. Slavery, the corregidores and the Mita are abolished, the brakes ransacked. The people exult. It is the start of a revolt that will become a real mass movement with a revolutionary look. Claiming the memory of Túpac Amaru I, its leader follows in the footsteps of his illustrious predecessor, eager to pick up the thread of history where the last Inca emperor left off when he died – which, in this explosive context, is politically a masterstroke.

Confident, energized, engaging in numerous depredations, the troops of Túpac Amaru II are growing visibly. They take the lead and attack the Spanish contingent at Sangarara. Six hours is enough. This victory is the prelude to an impressive series of dazzling successes. Lima is stunned as the rebellion spreads, while Túpac Amaru II attests to oratory skills and political vision. He reaches out to all the humiliated people of Peru, hoping to rebuild a fair and harmonious society: mestizos, “little whites”, members of the Creole elite, even certain Spaniards, seduced by his speech advocating change – but not a complete rupture. with Madrid- join his marching army. The colonial edifice was shaken in just a few weeks.

At the same time, nearby Bolivia, politically dependent on the viceroyalty, was shaken by a revolt led by the Aymara Túpac Katari who soon stormed La Paz (March-October 1781), without success. The north of Chile is also agitated. The Andes rumble with a question: Is Túpac Amaru II the savior that native millennial beliefs announce? Many seem to think so.

Micaela Bastidas Puyucawa, his faithful wife, then advised him to march on Cuzco, which would allow him to hold all the Andes. But he prefers first to make sure of his rear and reaches the south, Arequipa in particular, to the shores of Lake Titicaca where, everywhere, he makes sure of the rallying of the populations and the destruction of the symbols of Spanish iniquity. . Then, with an army of 50,000 men, Túpac Amaru II turned to Cuzco, determined to free the symbol of past Inca greatness. The assault was launched on January 2, 1781. But the battle, decisive and certainly victorious if it had been launched earlier, was a failure. The Indian surge is stopped by the Spaniards, who have had time to reorganize under the orders of Marshal José del Valle.

From then on, the troops of Túpac Amaru II experienced an interminable retreat and suffered from defections. The war changes pace and becomes a racial conflict in which all the non-Indians having taken part in the movement feel foreign, to the point of being threatened. Indian anger is exploding everywhere. The royalist forces record rallies by playing rivalries; the Indian nobility, divided, finds Túpac Amaru II too ambitious for their taste. The counterattack is ready. Madrid demands it.

In April, Túpac Amaru II, betrayed by a relative, is arrested. On May 18, 1781, in the main square of Cuzco, he suffered the same punishment as Túpac Amaru I after seeing his whole family tortured and executed before his eyes. Nothing must remain of him, as two centuries ago. One of his brothers, then a cousin, continued the fight in Andean eagle’s nests but they were definitively destroyed in 1783.

This extraordinary struggle degenerated into racial warfare; the repression was even more terrible, and above all without pity. All this led to the death of 100,000 people, without an exact figure being certified. Dead silence reigned over the Andes. Madrid believed the revolt to be over; she made reforms to appease people’s minds, nothing more. The proud metropolis was wrong. The revolt of Túpac Amaru II was the greatest of the entire Hispanic colonial era: it sounded the death knell of the greatest Empire of the time which, a generation later, would be swept away in the whirlwind of the wars of independence.

The Fortune of a Name

The multiple variations of Túpac Amaru cover the field of politics and culture. Historically, the last Inca emperor Felipe Túpac Amaru I succeeded his brother Tito Cusi Yupanqui. He fought heroically against the conquistadors from his Andean fortress of Vilcabamba before his arrest and then his quartering on the place d’armes in Cuzco in 1572. His death marked the end of organized native resistance, but it gave rise to deep expectations within the population of the Peruvian highlands.

Since then, in fact, a millenarian myth has it that the head of Túpac Amaru (buried under the Plaza de Armas in Lima) and his body (buried in Cuzco) have traveled underground, in the Abya Yala (the continent American), until the day when its various pieces will come together again; then, the Tawantinsuyu (“the four provinces together”, name of the Inca Empire) will radiate over all the Andes with a new son of the Sun at its head.

In the pantheon of national history

Several rebels put on the prophet’s tunic of the Inca Renaissance in the 18th century (for example, Juan Santos Atahualpa stood up to the Spanish troops for ten years before mysteriously disappearing in 1752), but only the noble José Gabriel Condorcanqui claimed to be of the line of Túpac Amaru I. Tradition says he was his distant descendant, but historians doubt it. His gesture is more important here than his heredity.

The coming to power of left-wing soldiers in Lima in 1968, under the leadership of General Velasco, propelled Túpac Amaru into the pantheon of national history. The neutralist and socializing “third way” of this particular junta makes it an official patriotic and anti-imperialist symbol. At the same time, the Uruguayan urban guerrillas, formidable for their publicized attacks, called themselves Los Tupamaros – an explicit reference in a region where Washington’s hand was at the very least active. Túpac Amaru becomes a continental figure.

At the beginning of the 1980s, part of the Peruvian extreme left regrouped in the “Revolutionary Movement Túpac Amaru” (MRTA), a Guevara-type guerrilla. Known for its hostage-taking of the Japanese Embassy in Lima (December 1996-March 1997), the MRTA had a minor action and stood out from the ultra-violent sectarian Shining Path of Abimael Guzmán. Nowadays, the social, indigenous, and progressive movements of South America claim Túpac Amaru II. Bolivian President Evo Morales cites him among the historical figures he admires. The fame of José Gabriel Condorcanqui Noguera, therefore, seems to have a bright future ahead of it.

NB: The opinions expressed and the arguments advanced in this article remain the entire responsibility of the author and do not necessarily reflect those of the History of the Inca Tupac Amaru II.