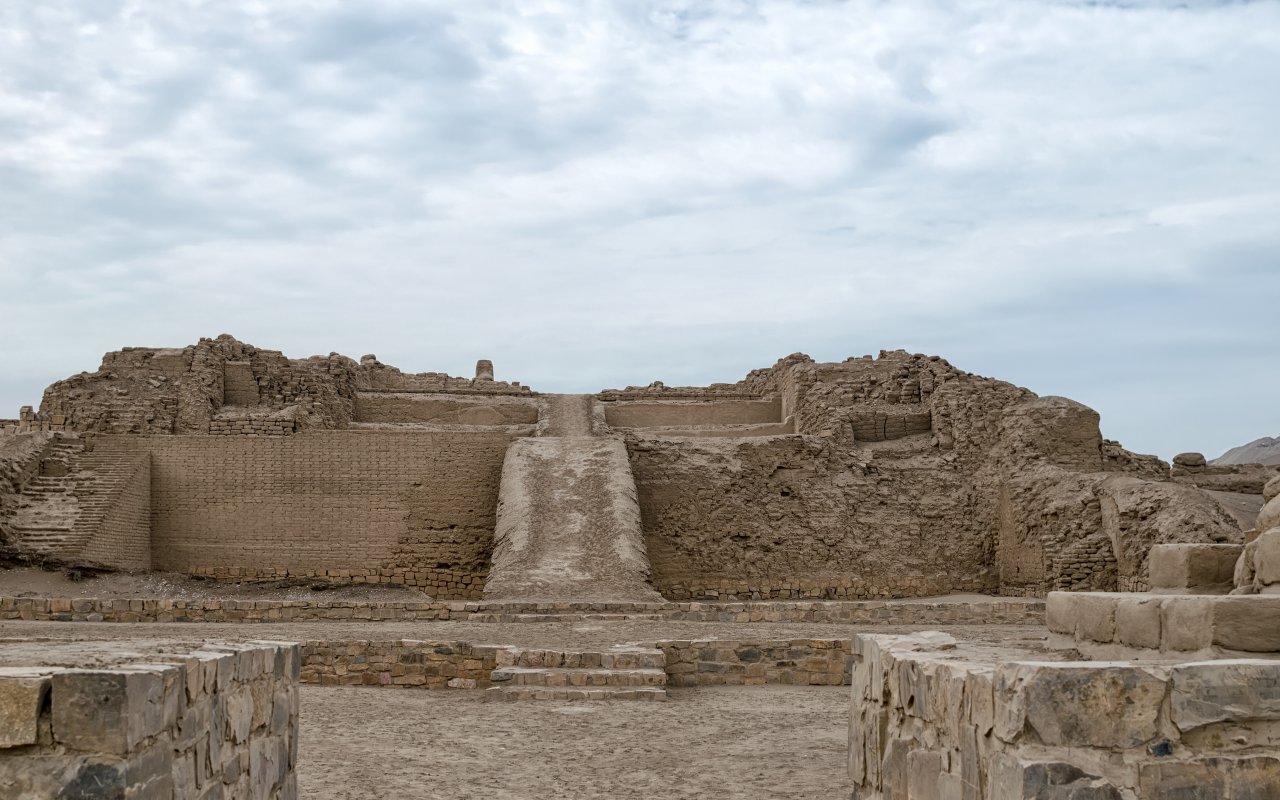 An incredible wealth of culture and history of  Peru and its different civilizations. The site brings together several imposing buildings and lets us discover an ancient city that has gone through many civilizations and had different functions: religious center, commercial hub, or administrative center.

Only nobles lived in Pachacamac. The rest of the people made pilgrimages there from all over  Peru and even Ecuador.
They came laden with offerings, gold, pottery and shells so that the shaman could consult the god and respond to their requests when their local divinity had not succeeded.
These treasures, brought from all over the country for hundreds of years, were hardly found on the site.
It is said that during the Spanish invasion before the site was looted, a Chasqi (Inca messenger) warned the shaman of Pizarro’s arrival. This one sent a convoy or was transported all the wealth of the site on the  Inca path leading to Jauja, an important city of the time. To date, the treasure of Pachacamac was never found.

Pachacamac extends over 465 hectares starting from the museum and extending over several structures: the pyramid, the ancient temple, the painted temple, the temple of the sun, the Plaza de los Peregrinos…

It was in 1896 that archaeologist Max Uhle uncovered many buildings through the establishment of an excavation plan. He was the pioneer of many discoveries on the site of  Pachacamac in particular with the Temple of the Sun, the cemetery located in front of the Painted Temple (or Temple of Pachacamac) just like the cemetery located right next to the Temple of the Sun where he made the discovery of sacrificed women.
It was then the turn of Alberto Giesecke in 1938 to discover the statue representing Pacha Kamaq, later nicknamed “The idol of  Pachacamac  “.
Today, archaeological work is still going on. Given the extent of the site and the thick layer of sand and earth, it is certain that the soil still holds wonders and suggests new discoveries.

The Peruvian national institute of culture determines the following list as being the main buildings of the site among more than fifty:
• The Temple of the Sun
• The Macacona (or Acllawasi)
• The Painted Temple (or Temple of Pachacamac)
• The Temple of Urpi Wachac
• The old temple
• The pyramid with ramp N°1, N°2 and N°3

The legend of Pachacamac: the myth of Cavillaca and Viracocha

This legend tells the story of Cavillaca, a young woman so beautiful that all the gods courted her. No god could seduce her until the day when Viracocha, a malevolent god dressed in rags, burning with love for her, summoned magic and transformed himself into a bird. He landed on top of a Lucuma and deposited his seed hoping that the young woman would eat the fruit and become pregnant. What happened. After a year, she called all the gods to know the father of her child. At the assembly, she asked the question to all the gods but no one answered. She then put her son on the ground to see which god he would go to. Seeing his son clinging to Viracocha’s leg, Cavillaca ran westward with his son in his arms, furious that such an abominable being could be the father of her child. Arriving on the shores of the Pacific, she decided to go into the water with her son, who both turned to stone.

Viracocha despairing of the disappearance of Cavillaca decided to go in search of him. He called for help from the animals he met on his way. Depending on the answer, satisfactory or not, he attributed good or bad characteristics. Thus, the condor assured him that he would find the beauty, and so Viracocha declared that the condor would know a long life and that he would always have enough to eat and that whoever killed a condor would also perish. On the contrary, the skunk declaring Cavillaca too distant to be found was condemned to a foul odor and activities limited to the night. After several days of searching, he arrived on the coast and discovered two small mountains near the shore, Cavillaca, and his son.

The  Lima  team went to the  Pachacamac site  to learn more and more about the history of  Peru .
Accompanied by a smiling, friendly and very competent guide, we set out to conquer this major site of the  Lima culture.

While receiving several explanations, we moved away towards the heights to admire the panorama overlooking the city and the more distant almost desert mountains.

After a first stop at the Mamacona temple, a temple dedicated to religious women dedicated to the worship of the sun, we find ourselves in front of the remains of the former residences of the great religious leaders of the time.
This building steeped in history was the place for celebrations and gatherings.

Time for a few shots and we start a short walk to admire the murals and the Temple of the Sun.
We pass over the old cemetery of the site and can then see some human skulls and bones, on the sand.
The guide then tells us the legend of Cavillaca against the backdrop of the two small mountains immersed in the Pacific mentioned in the legend.

Under the heavy sun and the hunger in the stomach, we then left in the direction of the museum.
After taking a few photos, we took our minibus back to a restaurant located about twenty minutes from the site. But the game was worth it! Super nice decor and excellent grills (vegetables and meats).